Assists in: - Meeting and sending-off ambassadors, officers and their dependents, accredited in Uzbekistan, guests and delegations of

Assistance in visa support through the Consular Department MFA of Uzbekistan, in the renewal of visas through Department of Entry, Exit and

DEPARTMENT FOR PERSONNEL RECORD OF REPRESENTATIONS

Assists in registering of foreign representations accredited in the Republic of Uzbekistan, enterprises with foreign investments, and

The Airline Ticket Office at the BDS MFA is a direct agent of Uzbekistan Airways. Passengers are provided services of buying e-ticket

Based on the license granted by the Ministry for Development of Information Technologies and Communications of the Republic of Uzbekistan, 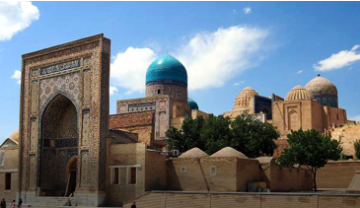 «Ferghana valley» is the pearl of Uzbekistan

Ferghana valley
For the richness and colorfulness Ferghana valley is called the Pearl of Central Asia. Valley is bordered with the chain of Tyan-Shan and Gossary Alay mountains and opens the gates for the Sirdarya river.
Ferghana valley always had а significant role in the history and culture of Central Asia. According to ancient Chine’s history Ferghana was belonged to Davan which was the most important city at the end of second century and in the middle of the century it was one of the leading nodes to the Movoraunnakr.

In the XI century Margilan was the largest city of Fergana oasis famous for its silk fabrics, which are along the Silk Road merchants exported to Egypt and Greece, Baghdad, Khorasan and Kashgar. And today you can call Margilan the silk capital of Uzbekistan. It produces the famous "khan-atlas", woven and dyed by hand on an old technology.
Rishtan is situated in 50 km far from Ferghana. Rishtan’s people were famous for their pottery products in IX century. Secret of red soil, natural mineral colours and remnants of mountain’s plants which are used in pottery 1100 years till carrying from generation to generation. Masterpieces of  Rishtan’s masters which are great plates, deep caps, jars for water, dished for milk described in unforgettable colours and they are decorating a lot of international exhibitions, museums and private collections. Kakhand was one of the main city in Ferghana valley in large period. It was the capital of Kakhand in XVIII-XIX centuries and occupied a lot of part of Uzbekistan and neighborhood countries. Kakhand was also great religious centre. There were 35 madrasa and 110 mosques in its blossom period. Unfortunately most of them were destroyed by earthquakes and by the time of Soviet Union.

In the middle of the century there was a town of Cuba referred to in Arab sources to 10 century, consisting of 3 parts: the citadel, shakhristan (were surrounded by walls with towers and gates) and rabad.

MARGILAN
The first information about the cities of Ferghana region is mentioned in writing monuments in 2-1 century BC. There are 70 big and small towns in Dan-Yuan state in Chinese chronicle. Material remains were founded in excavation, among them were the unique ceramic dishes of high quality, painted with specific colors with the depiction of tender pattern, also the mill made of stone, motor, means for making surma (cosmetic mix) stones for weaver’s instruments, remains of buildings, the signs of being pagan religious. Sure, all these, deserve a great attention, excavations show, that all these products are made by smart masters and craftsman with using of high technology. Writing information about Marghilan belongs to X century.
In "Baburnoma" Zakhiriddin Muhammad Babur also notes that Margilan is one of the 8 cities of Fergana, tells about its modernization, and praises its sweet fruits, the kinds of pomegranate “Donai kalon”, apricot “Subhoniy”.
By local information, the city had 12 gates.
Favourable natural geographic conditions helped Marghilan to become a big city, across which in XI-XII century North and South branches of Great Silk Road went through.
In this period Burhoniy, which created Islamic right, lived and worked.
During the period of Amir Temur and Temur’s rules, Marghilan also considered one of the biggest cities of the Ferghana valley.
Marghilan is famous all the world for its material — atlas, which are made of silk. The population of the city was engaged in sewing since the ancient times and also making national heat.
Sellers moved out different materials to Baghdad, Kashgar. Egypt, Rumania and Iran by the Great Silk Road.

Hudoyar-khan’s Palace
A lot of mosques, madrasah, trade centers and other historical objects were build since XVIII century in the capital of Kokand State. Among them: “Urda”, built by Hudoyar-khan in 1873y. This building is also called Hudoyarkhan’s Palace. The common square of palace is 4 ga, its basement raised to 3 metes. For this reason for entering to the main gates from the east side was build a special road —pandus.
In the upper part of darvozahonait’s written: “The Great Said Muhammad Hudoyar-khan” by Arabic letters. At first the length of the palace was 138 metes, width — 65 metes. The palace consisted of 7 palaces, and 119 rooms. In that time “Urda” was surrounded by inner and outer fence. The fence wasn’t saved by present time, only 2 yards and 19 rooms left. Here the regional study museum is situated

KUVA
Kuva is the center of Kuva district of Ferghana region of Uzbekistan. There are furniture factory and tinned food factory in Kuva.
In the Middle Ages there was city Kuba, which was mentioned in Arabian sources of the 10 century. It consisted of three parts: citadel, Shahristan (enclosed with towers, walls and gates) and rabad.
The ruins of this city still exist. In 1956-58s during the’ excavations out of the walls the Buddhist temple of the 7-8 was found. There were some Buddha’s statue and other statues of different Gods of Buddhism; on the citadel there were some houses with the examples of housekeeping of the 7-10 centuries.
So far the scientists have not fixed the exact age of Kuva, but according to some findings, they suppose the first settlers appeared in the 4-3 centuries B.C. on the place of the future big city.
Kuva, called Kuba, played a great role during the early Middle ages.
At that time different handicrafts such as potter’s, jeweler’s, processing iron were developed the fragments of monumental statue and the destroyed Buddha’s statue were found in the temple, it says about the penetrating Buddhism into Ferghana. The temple was destroyed by Arabian conquerors when they came to Central Asia.
The scientists consider that the medieval Kuva is the Motherland of the great scientist encyclopedias Ahmad Al Farghoniy.

SHAHIMARDAN
Shahimardan is one of the most beautiful places in Uzbekistan. It is 55 km south of Ferghana city. The town is 15000m above sea level and is situated among the Altay mountain range. Shahimardan is washed by the two rivers on either sides: the Ok-su and the Kok-su, which flow together and form one river — the Shahimardan-Say. It is an interesting fact that on the way from Ferghana to Shahimardan you have to cross Shahimardan River seven times to get to Shahimardan Mountain Region. From 1930 to 1991 the town was known as Xamzaabad, it has been known as mountain resort since 1934. Shahimardan is in a small Uzbek enclave on the territory of Kyrgyzstan, 52 km south of Ferghana City on the northern slope of the Alay Range (1550 m above sea level), the banks of Ak-su and Kok-su Rivers where they flow together, among evergreen tree forests and bushes.
Medium temperature in July- 220C, in January from — 30 to 30C. There is Hamza Hakimzade Niyazi (I889-1929) museum and mausoleum, there is a camp Dugobain the alp mountain region, tourist center and handy craft co-operative (needle-work).
The history of Shahimardan roots with the name of Hazrat-Ali, the fourth Khalif, and Prophet Muhammad’ son-in-law. There is one version that when Hazrat-Ali was in Central Asiahe visited Shahimardan and possibly one out of his seven graves is in Shahimardan settlement, practically it is impossible neither to prove nor deny. In translation from Persian “Shahimardan”, means “People’s Rules” which means the same as the name Hazrat-Ali.
In the 1920th there was Hazrat-Ali mosque and mausoleum, where believers come to pray. But during the Soviet period the mausoleum was ruined and it was reconstructed only in 1993 when Uzbekistan became an independent Republic. Hazrat-Ali Mausoleum was rebuilt on the same place and it has the same form.

RISHTAN
Rishtan is in 50 km to the west from Ferghana, it is administrative centre of the Rishtan district of Ferghana region. From ancient times Rishtan glorified with ceramic products and with the best kinds of apricot.
From the historical sources known that 800 years the man-made from ceramics by talented masters. There are natural minerals, red clay, mountain plants which are important components for the making and decorating colourful ceramic productions of Rishtan. The masters of Rishtan fame for all of the world with their wonderful technology-productions of ceramics by extraordinary nontraditional ways of decoration of made productions. From generation to generation the skilled craftsman handing the secrets of their own mastership. Even nowadays in Rishtan it is possible to see the work of the masters of ceramics in a small workshop with using of ancient technology. Together with it in the town it works the biggest workshop of ceramic productions. The ceramics of Rishtan were presented on numerous international exhibitions and fairs. Rishtan is the oldest centre of ceramics skill of Central Asia.
In this place was worked out the exceptional technology of making ceramic productions which arc used in everyday life, these productions not just for local inhabitants but these are exported beyond the bound of Ferghana valley. Rishlan’s local ceramic differ with its shape, by ornament and colourful gamut. For the painting of Rishtans clay productions it is typical the usage of turquoise, dark-blue and brown colours on the milk-white background. The sourness glaze which made from ashes of plants imparts colourful shining to the clay products.

Have found an error in the text?

Allocate with its mouse and press CTRL + ENTER

The text, which is an error:
Your comment for administrator: